The black gloves are a pair I made for my teaching placement mentor. The pattern is Susie’s Reading Mitts from Dancing Ewe Yarns, and I used one skein of Katia Merino 100%.  Looks great, and can be used for wiping a whiteboard at a pinch.

The Pi Mitts I made for Pi Day – 14th of March, or 3/14 in American. As in 3.14? Because I have a bit of an obsession with π, as the numerati will deduce from the quote under my avatar. Utterly wasted on the little darlings at school, who are largely unaware of the symbol, and the fact that the decimal places continue

beyond .14. But I like them. I started with green as the main colour, but found it didn’t quite ‘pop’ enough for my liking, so the second glove uses the red. It’s Teddy DK, wholly acrylic. They’re a little tight on my hands, but I was in a hurry. The pattern is a free Ravelry download.

Because I am a sucker, I made the skully convertible gloves and the Tam of Rassilon for X at Christmas. He has somehow become totally unequipped for winter, no jumpers, coats, gloves, anything to keep warm. I’d always intended to make both for him anyway, but the

separation got in the way. The tam had to be blocked on a pizza dish! It is vast – though doesn’t look it worn. It’s now March, and I think he’s probably lost them already, doubtless on a binge. Certainly haven’t seen him wearing or carrying them since January.

I have deleted all the patterns I had favourited for him on Rav. That’s all, folks. I’m done. 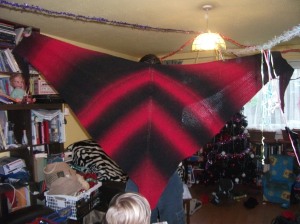 On the right is a Drops shawl pattern, a basic garter-stitch domino specifically for long-repeat yarn, somewhat enlarged by m’self. The yarn is Teksrena 4-ply 100% wool, a Lithuanian yarn I got off eBay. The photo doesn’t do justice to the glowy colours. I call this Burning Embers.

It’s not a pretty-pretty shawl, but what I wanted was a big blankie that I could wrap around myself. It’s been very useful in the late and bitter winter weather we’ve had. It’s big enough to wear like a Faroese shawl, tied at the back. People like it a lot: I always get compliments when I wear it.

And finally for this post, Mickey Mouse. The Mighty Offspring has developed a real fondness for Mickey’s Playhouse, to the point where I am actually prepared to take him to Disneyland Paris for a few days this summer. Not going mad and considering a fortnight in Orlando, just 3 or 4 days. I… do not share his enthusiasm. Never have, even as a child. That squeaky voice just infuriates me. At least he’s dumb at Disneyland.

The pattern is Leisure Arts #3293, Disney Home: Mickey and Minnie Dolls, which I scored off eBay. I want to make it in Sirdar Snowflake, but while collecting the necessary colours, I made this in Teddy Vanguard DK, Spectrum Strata, and Robin Bonny Babe which I had to hand. The shorts come off, and I have an order for pyjamas already…
T’ra!

One thought on “More Gloves…”