Gloves… I love gloves. Since Kim’s Sockotta Fingerless Gloves pattern went viral in my brain while knitting a pair of fingerless gloves, I’ve been able to pick up needles, wool and produce them with no trouble. In fact, that’s pretty much what I did one day when a friend’s daughter admired a pair my son was wearing – I even did an impromptu cable down the back. Unfortunately, I didn’t get a picture, but I was very pleased with them. I also have a pair of Cotillion Half Gloves to finish off, using some Twilleys of Stamford Freedom Spirit yarn that I received in a swap.

Last summer, we went on our first (and as it transpires, last) family holiday. I had been pushing this for – well, ever, but there was either not enough money, holiday time, or something, and it never happened. However, Summer 2009 I decreed to be the year we would finally go to Sweden. X’s friend emigrated there – well, I told him to go. Sounds good, yes? I scare X’s best friend into leaving the country! But in reality, his girlfriend lived there and their long distance relationship was wearing on them. On his way home from one visit, he bemoaned that he couldn’t just stay there – so I pointed out that he had every right, as an EU citizen, to move to another EU country and sent him some websites on the issue. Six months later… The relationship has since foundered, but he has friends there, a job, and he speaks the language and is even going to university now. All good. 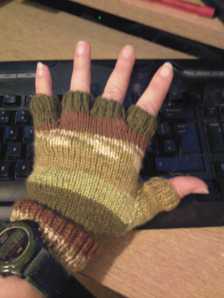 Naturally, I wanted to take some knitting with me to Sweden. We flew out from Stansted at silly o’clock in the morning, necessitating taking a train down the previous evening, and sleeping in the airport until check-in. Then the flight, the bus to Göteborg, the holiday itself, and the return journey – lots of knitting time. Because I can never seem to get any sensible information about flying with needles, and had a steel crochet hook in my check-in luggage confiscated by airport security/customs on another flight before the current terrorist panic, I decided not take anything I would care about losing. So I made a couple of sets of dpns out of bamboo skewers!   There was another motivation: I’d been seeing short dpns mentioned around and about – 5″ and 6″. Never having used anything shorter than 8″, I wondered if these would be useful – after all, I’m fine with circs, and the needle part of them is about 4″-6″. However, I didn’t want to spend money on what might turn out to be nothing more than a multi-pack of cable needles. Like I don’t have enough of them! 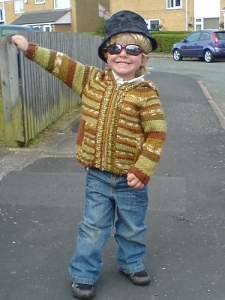 I cut the skewers to size and started off using a pencil sharpener to create the points, but this just caused splitting no matter how careful I was. An emery board turned out to be just perfect. Afterwards, I painted them with nail varnish as a quickie way of smoothing the surface. As it happens, the skewers are exactly 2.5mm, spot on. The first set, the 6″ dpns, I painted in gloss colours which only afterwards I realised were Rastafarian. The 5″ set were in more subdued frosted purple, gold and white varnishes. As an aside, the gloss lacquer held up well at first, and stitches passed smoothly over it. However, over time, it seemed to get sticky, and wore away on the points, leading to splits. The frosted varnish, initially grabby because, you know, it’s got slivers of glitter in it, has held up better, and did not wear as badly.

After this, I was on the hunt for a pattern that I could use them on, and decided I deserved some gloves. The yarn is Teddy Picasso Colour-keyed, a DK acrylic: I’ve used the chunky version before for a much-loved jacket.  Due to the colours of the 6″ dpns and the DIY nature of their construction, I dubbed the gloves Jamaica? Why, yes I did! Go on, laugh. I know you want to. The Mighty Offspring noticed me making the gloves and demanded a pair as well, just like mine. This is my own free pattern, the Mitts-to-Mittens – linky on the right.  It took some fiddling to get my own pair to match (sorry about the swirling on the right-hand

pic, I think it’s because of shrinking down too much), but you can imagine what it was like with his. The single ball could have made a few more pairs, but not after I’d hacked it to bits. It was worth it. They are Ben 10 gloves. They are Humungasaur hands. He can shoot lasers out of them, and absorb sunlight that turns in to BLOOD. Good value for 69p.

The next pair I made from some Teddy Vanguard chunky in a green so light it is practically fluorescent. I think I got it with the intention of teaching someone to knit. It just happens to be nephew Ben’s favourite colour, and he was thrilled to receive these an hour or so after admiring the MO’s pair. These, naturally, were knit with 8″ 8mm plastic dpns from under the counter in a charity shop, where such shameful items are kept. Why? Don’t be daft. Chunky on 2.5mm? As handy as the DIYdpns were at the time, I’ll be sticking with 8″ plus in future. The 6″ set were okay, but doing the MO’s gloves on the 5″ set nearly ruined me. It might have been the 10 days of knitting with shorter needles, or just the 5″ set, but for the first time ever I got hand pain. I was not knitting much more than usual, possibly slightly less, but my hands, both of them, felt like someone had taken a hatchet to the palms. Varying my hold didn’t help, and even now, over a year later, I still get twinges.