I grew up in a house with no TV. Shocking, yes? We also had no phone. GASP. There were lots of other things we didn’t have – mains water and central heating, for example, but it’s the TV I’m concentrating on here. I only got to watch the goggle box in other people’s houses, and that rarely: people in those days still switched the TV off when visitors came, to facilitate conversation. Those without TVs switched off the ‘wireless’ – as radios were known – and those without wireless put their books/knitting/embroidery down, or removed their wellies/aprons, depending on the time of day.

However, when I was about 9, we got our first TV, a black and white model in a beautiful, possibly fake wood surround, with a big dial for tuning into the channels. There were four channels, none providing more than 8 hours of programming a day. Actually, there were only four channels because we lived near enough to the border with Northern Ireland to get their 3 channels (BBC1 & 2 and UTV). We were lots more swanky than our compatriots further south, who only got RTE. Not RTE1, 2, etc. – it was the only channel then.

I became almost instantly obsessed. I absorbed TV into my bones, memorising cast lists, story lines, directors, production companies – I was a walking IMDB. But my most favouritest thing ever was the Saturday matinee. Every Saturday, one of the channels put on an afternoon movie, usually a black and white classic. There was also usually a Sunday matinee, but they weren’t quite so good: too many musicals, and from different eras. They were great family watching, but oh, the Saturday matinee knocked them all into a cocked hat. On Saturdays, square-jawed men in hats traded cigarettes and incomprehensible quips with sultry, sassy women in suits or negligee, in train stations and piano bars. Cynics and losers sacrificed themselves for love and honour, heroes and heroines self-destructed from their darker passions, life was lived against a backdrop of swelling piano and strings, and the Dame ruled them all.

The Dame wasn’t always a beauty, or a brain. She wasn’t innocent, or evil. What she was, was confident. She knew herself, and was happy with it. She put on no airs, put up no pretences, suffered no fools. Tough and tender by parts, she went after her goals, and even if she failed, you knew she’d be okay. There were many takes on the Dame – Katharine Hepburn’s tomboy athleticism, Bette Davis’ brittle sharpness, Barbara Stanwyck’s hardness, Ava Gardner’s voluptuousness – but the epitome was the wonderful Lauren Bacall. Perhaps because Betty, as she was known to her friends, seems to have sashayed the walk in real life too, her performances have a multi-layered authenticity that other dames simply don’t match. They’re too sweet, too venal, too remote. Even as a teen in To Have and Have Not, Bacall exudes the BTDTBTTS attitude of a woman who knows she can handle whatever comes her way. 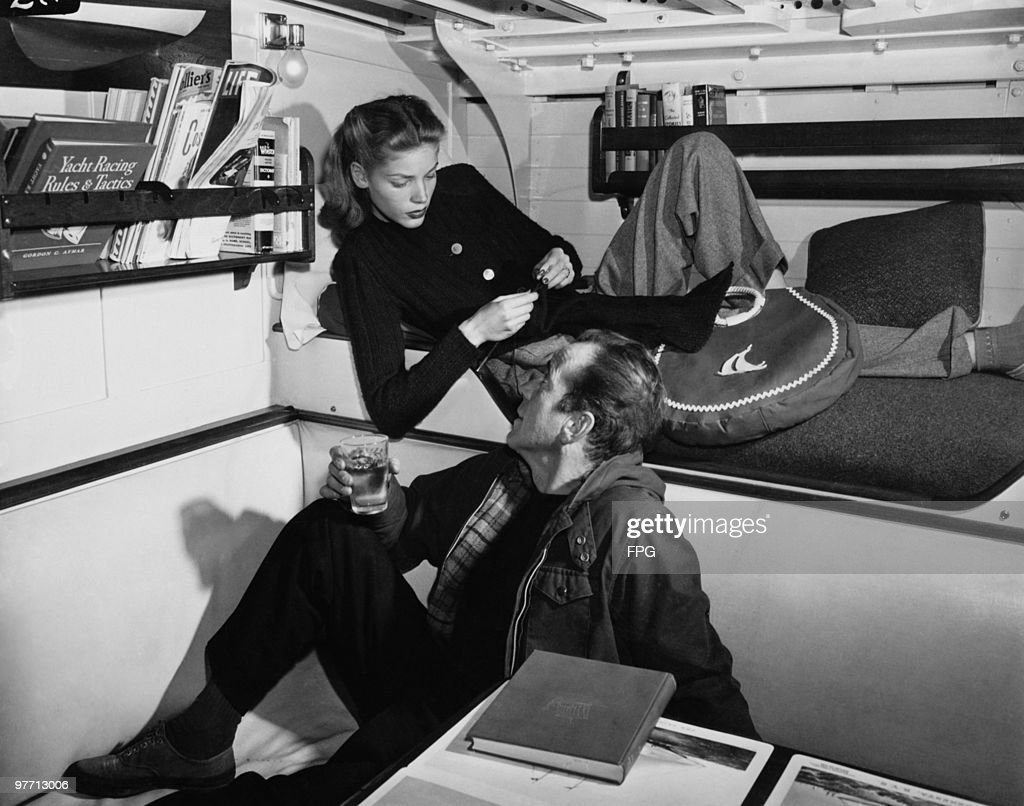 Bacall was an inveterate knitter herself, often photographed with a WIP on movie sets and in private life.

And so, to knitting. Normally I like to outline where my inspiration comes from, but in this instance, it’s all a bit … nebulous. I like Bacall, but I can’t say she was the direct inspiration. I’m a big fan of monochrome, tessellation, and fitted clothing, but again, these didn’t call to me. Knit Now put out a call with a theme of budget knitting. That didn’t call to me either! Sheesh, I do nothing BUT budget knitting! Somehow, though, the various elements fermented away at the back of my brain until a couple of days before the call was due, and then it was all, “how do I want to look when I’m strapped for cash? FABulous, that’s how. How can I look fabulous? Try for classy rather than runway. Who’s classy? Lauren Bacall. What’s she worn that’s particularly classy? well, that houndstooth suit in The Big Sleep is kind of iconic…” and so on. Lots of Google image searches for the structure of the kind of sexy-but-not-sexy clothes Bacall wore, trying to pin down an appropriate shape.

The Dame Pullover grew, rather than sprang fully formed into my mind. I think it’s a style that’ll grow on people too. It’s smart enough for the office, elegant enough for cocktails, and, yes, classy enough for everything from a church jumble sale to the Aspen ski slopes. I love it more than is seemly for its creator – I should be more modest about these things, and I usually am, I think – but this is perhaps my favourite pattern of those I’ve produced to date, and I design only what impassions me. The nipped waist, the Vikkel braid borders, the pointless wee buttons on the polo neck make my toes curl with joy.

The fact that it’s also the first and, so far, only pattern of mine that’s gone through tech editing with no issues is just the whistle to my pucker…

And here’s the sub. Spot the statutory misspelling that escaped me! And the novel design element that I forgot to take notes on, and then couldn’t reproduce for the sample… I’m making a lot of use of my Kindle Fire, a slim Targus stylus, and an app called SketchBookX Express to produce my sketches these days. Find an image, import it, put a layer on top and ‘trace over’ the image, then delete the image and save the tracing. It’s pretty much what the cool kids have always done with Photoshop, but for me, the touchscreen beats the mouse any day. This technique should work as well on any touch-enabled screen, though I can’t recommend software for individual platforms.