It’s the Mighty Offspring’s 10th birthday tomorrow, which means it’s about 10 years since I got back into crafting seriously!

I outlined my route back in this post back in 2007. It wasn’t quite where I’ve fetched up, designing hand-knitting patterns!

Instead, it was needs-must crafting for my suddenly-budget wedding after my research career went up in smoke. Strapped for cash, I crocheted wire and bead motifs into invitations and jewellery. 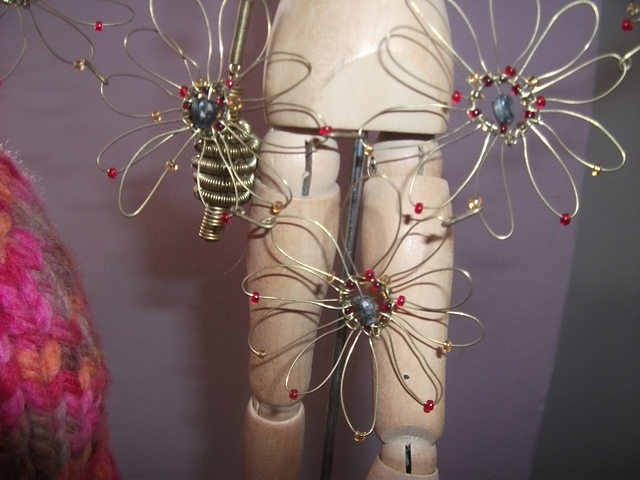 I had no real intention of continuing – I’m not a jewellery wearer at the best of times – but I never did put the hooks away again. I kept on playing with the wire, buying bits and pieces, reading up on the subject on the internet.

Of course, even then, there was a lot more about yarn-related crochet (and knitting) on the internet than about wire crochet, so naturally I found myself looking at that too. I found, and was entranced by items like Rachel Seeley Merrill’s Daisy Crochet Skirt, Marnie MacLean’s Gothic Lace cardi∗, and 302 Calories (actually, that whole issue of Knitty should be required reading – go look). I discovered Garnstudio’s DROPS patterns, Knitting Daily (Sandi Wiseheart’s Bust Dart series probably taught me to design), and the Yarn Harlot.

Then, on some blog or other, I saw a mention of a new website called Ravelry – and down the rabbit hole I went…

I thought I’d mention what got me back into a crafty mode, after what is uncomfortably close to 20 years.

In 2003, my last academic research contract came to an end. Having been in the game for 10 years, I decided to focus my job-seeking on the lecturing market. I got lucky on one of my first applications, a junior lectureship at a former FE college turned uni. I started the induction process, which had to be done beforean official offer of employment was made (yes, I know it’s daft, but the college had been run by the council, council rules apply).

Then, everything went quiet – no response to my emails or phonecalls. Three months later, I was still waiting for the official offer. By which time I was on the dole, and Tiny Husband had been forced to propose marriage. Finally, I threw a hissy fit over the phone, demanding to talk to the Head of Personnel. Complained loud and long until she promised to look into it.

And two weeks later – after another few phone calls – I got a standard letter of rejection in the post. The type of letter sent to applicants who aren’t even getting an interview, not to someone who’s gone through almost nine months’ worth of interviews, shortlisting, visits AND an induction process, to work in a department that’s already badly short-staffed. No explanations, no apologies.

And a wedding to pay for in less than 2 months*.

Now, I should have chased it up, but I didn’t. 9 months – more, if we go back to the application closing date. Paying for travel to the 2 interviews, tour of facilities and 2 or was it 3 induction meetings. A substantial phone bill from ringing and emailing (I was still on dial-up back then). ARRANGING MY WEDDING IN P**SING APRIL TO SUIT THEM!!!! It had all been too much and I was sick of it. **A pox on all their courses**. So I decided to forget it. They never re-advertised, so I assume the uni refused to release funds to cover my first year’s salary – it happens. The experience did coalesce my feelings about research as a career – less secure than acting, less pay than a binman… So now I’m in school-teaching. Better pay, better prospects, better pension, more security, better hols. Or should I say holidays, full stop – never took any as an academic.

So… paying for a wedding. I looked at my finances and reckoned I could squeeze another £2,000 out of the equity on the house without crippling us. I’d already – foolishly – ordered the wedding dress (that’s it in the side bar pic), at a head-spinning cost of £650. Though for a one-off designer made-to-measure, that’s not too bad. My sis offered to cater and pay for the food, a friend offered to make the cake, another did the photography, I cashed in my Airmiles for the honeymoon – the total cost to us of the wedding, including honeymoon and a new digital camcorder for the ceremony, was around £1,300. And I could have done it for £6-800 less, if I’d gone for a cheap dress and borrowed a camcorder.

A major saving was on invitations. I didn’t see any I liked, and they were all ridiculously expensive, so I thought I’d try making them. I got gold-coloured cards and envelopes, printed off the inserts, and made bows for the front. They didn’t look ‘special’ enough, so I got some gold wire and gold and red beads, and crocheted daisy-like flowers to stick on the front. Fooled everyone – no one believed they were home-made!

Having a few left over after the invitations were sent out, I hit on the idea of making my own jewellery. I made a necklace and earrings using the daisies, with ‘springs’ and hand-wound metal beads – they’re just visible in the userpic on the side. I also made some hairpins which aren’t visible in the userpic, using spring-bound beads to attach the daisies to bamboo chopsticks – red and gold for me, plum and gold for my bridesmaids. Tip for bridesmaids – give them the material and let them make up an outfit that they know they’ll wear again. One of mine, who’s Asian, made up hers as a traditional embroidered salwar kameez; the uber-goth bridesmaid did a goth thang with hers; and my sis made a loose jacket and skirt, which she’s worn to work dos and weddings since. Unlike most BMs, they all looked fantastic, because they’d all chosen designs that suited them, rather than me forcing them into something I wanted – luckily the colour worked for all of them!

So there you have it – how I got back into crafting. I’m currently making wire crochet flowers for a friend to put on a bag she’s felting – they’re silver, and more chrysanth-y than these. Wish I could do more jewellery but Ickle Baby Cthulhu is too interested in all the sharp little tools… He barely leaves my knitting alone as it is!

* – Yes, the bride’s father is supposed to pay for the wedding. However, while my father was possessed of many fine qualities, they did not include fiscal generosity.