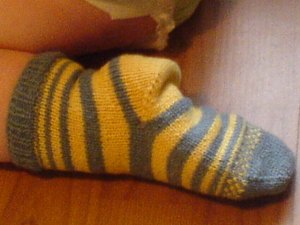 Yet another pair of socks for my mightily hoofed offspring. Ye gods I am bored with this sock business. The only thing they have going for them is that they are handy bus projects for my 10-minute commute. But I shall persevere until he has a reasonable supply – by which time he’ll probably need bigger socks – because today, for the first time EVAR, he has been willing, nay, demanding to wear something I’ve made him – yes, these socks. Ripped from my hands as I tried to finish weaving in the ends, which is nice because it’s not my favourite task, with shouts of “Mommy, put a socks on!” Guess they won’t get blocked for a while then. He pootled around the house until bedtime, when he adamantly refused to have them taken off. Half an hour after we put him to bed, I looked in on him. He was sitting on the floor, facing the window, chatting to his socks… 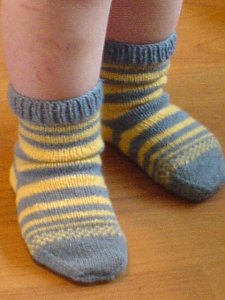 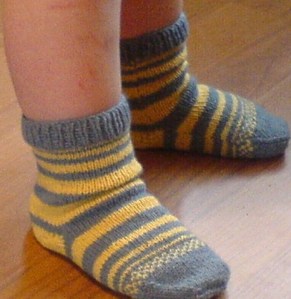 Again based on the Lion Brand pattern but modified for gauge as described previously, these are the Fibonacci socks I mentioned. So what’s Fibonacci when it’s at home? Well, HE discovered a sequence of numbers where each number is the sum of the two preceding numbers, hence 0,1,1,2,3,5,8,13,21, etc. So what? So, most flowers have a ‘Fibonacci’ number of petals. Fibonacci numbers also show up in the shapes of coastlines and clouds and other natural phenomena. Also, if you divide each number by the previous number, you get a result that is very close to the Golden Number/Section/Phi/Divine Proportion (1.618), whereby all sorts of The Weird And The Wonderful… ~Cue Twilight Zone music~. It’s all terribly amazing until you realise that mathematics exists to describe the universe. So it’s not exactly surprising when the universe just happens to conform with the maths, is it?

It is a little sad that this glorious stuff is too complicated to explain to kids who think maths is boring. 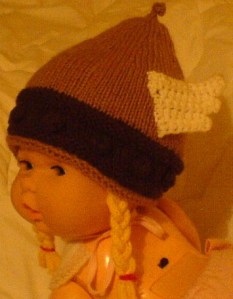 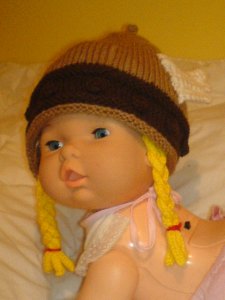 I have also – in two days! – completed a Valkyrie helmet for my cousin’s daughter Anna, who is a cute chubby little Brunhilde. It’s based on a Viking Girl Hat I saw on Ravelry. However the thought of forking over $24.50 for a kit had the predictable effect on my bowels, 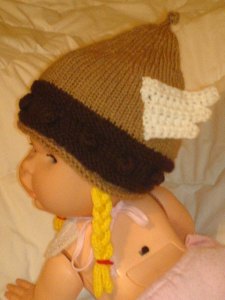 so I reverse-engineered it from the photos. I couldn’t tell for sure if there were horns or wings on it in the photos, but as a Viking re-enactor, I couldn’t in conscience put horns on it so wings they are.

I wanted a smooth, helm-like shape with no obvious decreases. To get this, I phase-shifted the decreases on each round (i.e., starting at the 1st stitch on one dec round, and on the 7th, 5th, 3rd stitch on the alternate dec round). The plaits are i-corded, though I thought about French-knitting them. In the end, though, I had the dpns in my hand, but the bobbins were somewhere in my knitting boxes…

(Modelled by my vintage fully-working Oopsie Daisy, with original outfit, for those interested in such things.)