Eventually… The pics are taken and awaiting upload from my phone.

The scarf is finished, ends woven in, washed and blocked. The rather stringy, fine mohair bloomed nicely – the resulting fabric appears solid until you look closely, allowing the lace flowers stand out well. The pics don’t really do justice – I was hoping to hang it by a window so you could see the light coming through, but had to settle for laying it on white paper. I shall hand it over on Thursday rather than Friday as she has a do to go to and might like to wear it. 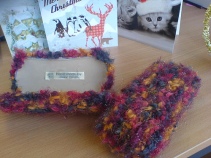 My sister’s bag is boarded, lined and sewn up, and lacks only the fastening. The specs cases for Mum and MIL are finished too, including the label inside. These won’t be in time for Christmas unfortunately. I won’t even get them off until Saturday. 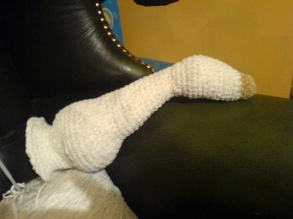 completed to the start of the bum, and stuffed as far as possible. I still have a little time to work on it, as I won’t see them until after Christmas Day anyway. I’m not entirely thrilled with the shape, as the head and neck extend more or less straight out from the body making it look more like a goose than a horse. Before I started, I did think it needed some short-rowing where the lower neck reaches the body – i.e., no building up of the back until the chest is in place. That would mean turning the work and working backwards. I can’t see an amigurumi way of doing it, except maybe by making the pieces separately and sewing them together in the right configuration. There’s a lot of shaping involved and correct stuffing is crucial.

ION, the deputy head was most distressed to see me knitting during break. Apparently I should be planning lessons. It has been pointed out that I am not in fact a qualified teacher, have no regular classes and therefore do not have PPA time, and am in possession of a contract that specifically forbids me from planning lessons (even though I DO, because there’s usually no coverwork). So he gave it as his opinion that I should be doing anything but knitting. Possibly helping out in the canteen, or cleaning the toilets then.

No scarf for him!

If he had any sense, he’d be begging me to run an after-school club for the tards…