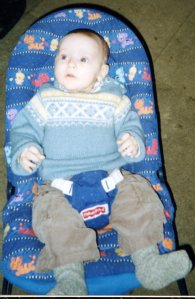 This is the little set I made for my nephew. The only negative point my SIL made was that it was a pity it wasn’t bigger because he’d grow out of it too fast. But look at the folds at the waist, and the cuffs are rolled up. Mind you, look at the socks. They must be four-year-old’s socks, poor kid.

In the second photo, it looks like the collar’s loose enough to go over his head without opening the buttons. The hat I made in a hurry, so I didn’t put the pattern on it. I was already in Ireland, and had to make it overnight. It’d have taken a couple of days if I had put the pattern in. It’s a long rectangle, seamed up the back and across the top. It should have pom-poms, but I made i-cord horns at the corners instead.

He’s such a sweet child. He’s very interactive – tries to get your attention and then burbles and babbles at you with a serious little expression on his face as if he’s trying to hold a conversation. Mum says if you sing to him, he yodels and crows along until you stop! 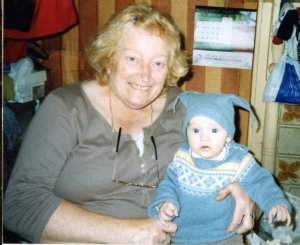 Tiny Husband’s sweater continues to knit up fast. The body and one sleeve are complete, and on a long circular needle ready for the EZ finish, and the second sleeve is well underway – 23r in, 100r to go. I laundered the two swatches I made from the yarn, one wash at 30deg only, one wash at 30 deg and tumble dry at 90deg. No effect, except maybe a very slight felting at the cast-off edge on the second, without shrinkage. Unfortunately this leaves me none the wiser as to fibre content. I was veering towards thinking it was wool again, as I read somewhere about one-plied wool that was intended for felting, but I doubt even superwash wool would survive being tumble-dried until, well, dry. Hey ho. So it is probably synthetic.

I just had another great idea for a sweater for my son. When I was pregnant we called him Ickle Baby Cthulhu (Destroyer of Waists, Bringer of the Nappies of the Elder Gods, etc.) or IBC for short. It was quite a theme. We even found a little line-drawing of a Cthulhu in a nappy, which I used as an icon on my pregnancy blog, and a plushie Cthulhu was the first toy we bought for him. So I spent most of the day making a Cthulhu chart for a little sweater… To add to the Bob the Builder (yarn purchased) and the Thomas the Tank Engine sweaters already planned.

And sod the baby socks. I want THESE. I’ve already fed my numbers through the Hourglass Knee-length Sockulator – though I’d rather have over the knee, maybe stockings? Something to scare the kids at school with…