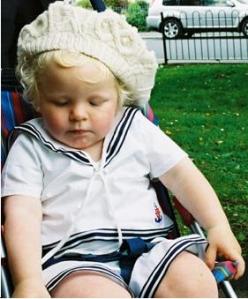 A few posts ago, I mentioned a matinee set I made for my niece. Specifically, how closely I followed the pattern for the beret, or bunnet as it’s called in my erstwhile neck of the woods, because I wanted to make one for my son. This was motivated by the fact that he kept slapping my niece’s on his head and running away, shrieking “Hat! Hat! HAAAAAT!” and giggling. So, dear reader, I did.

I guesstimated the number of stitches based on some rough measurements and memory, just made sure it had the requisite 7 segment swirl on top. I made it up in the same Blue-faced Leicester wool I used for the Aran cardi – which I still haven’t found.

For the stitch pattern, I used a single-repeat Tree of Life motif from Shelagh Hollingworth’s book, interspersed with a motif of my own devising (with a little help from Alice Starmore to get it started), repeated 4 times round the underband. My motif was an infinity symbol – an 8 on its side – which is a symbol I’ve always liked, with the forever and ever, amen. Nice combined with the Tree of Life too. For a bit of interest, I put bobbles inside the loops of the alternating two infinities to represent the point singularity at the start of the universe, just to continue the science theme. T’was only too late that I realised the result looked like boobies!

Around the edge, I put bobbles at 7-st intervals. I’m sure I had a deeply symbolical reason – I had for everything up to then! but it escapes me now. All I can think now is that it gives the bunnet a Henry VIII look… Over the top, I did two stitch patterns, both from the 1988 edition of the Complete Stitch Directory, one called Bee Stitch, the other Honeycomb Stitch. They weren’t a great fit into the space, but look okay. Actually, it looks a bit mediaeval, so perhaps I did have a Henry VII theme going on. Reason for Beeing? The Destroyer of Waists has recently become obsessed with flying insects, known collectively as ‘Bzzzes’. 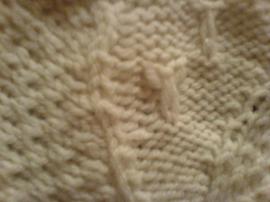 I’ve googled for these two patterns but what comes up is not them – and I’m not certain the Amazon book referenced will contain it, as mine is an older edition by a different publisher, so here goes: 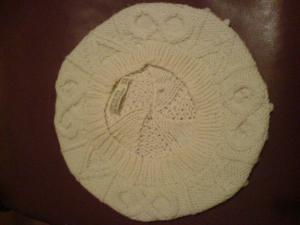 Honeycomb Stitch: Over an even number of stitches. Row 1 &

I like that they both use the same principle of knitting into an earlier row. There’s something very fractal-ly about that, similarities across different scales, leaf growth on trees being governed by the same principles that create fjords, etc.

On top, I added a tassle rather than a pompom, carefully set to sit sideways as in the pic. And of course he refuses to wear it…

Inside, my new Subh Milis label!