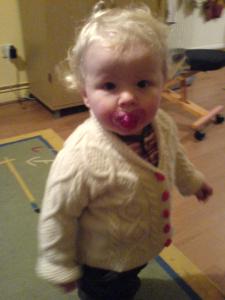 I learned Aran knitting at primary school from the redoubtable Mrs Anderson (just retired last year, and replaced by my cousin’s daughter, Miss Anderson, no relation!). It was a bag, satin lined, quite nice as I remember. No idea what happened to it, probably a victim of fashion’s tide, Aran being considered a bit naff, what with the island itself being just off the coast. Oh the cruelty and folly of youth! When I think of the dosh I could have made, as a ‘native Donegal craftswoman working in the traditional oeuvre’ I could weep. I haven’t gone near Aran knitting since, until I realised how gorgeous it would look on a certain little fat blonde princeling…

Knitted up over Christmas, using for the first time a pair of bamboo needles from a set purchased from China via eBay, and some lovely Aran-weight undyed Blue-faced Leicester wool. I cannot for the life of me remember where the pattern is from – probably one I downloaded via Knitting Pattern Central – but the skills learnt in St Anne’s all those years ago came flooding back. Before the first repeat, I was able to abandon the paper pattern and continue from memory and feel – okay it isn’t the most demanding pattern, but even so. I was chuffed to find something I could do really well. I’m a good knitter, better crocheter, but this was so… automatic, instinctive.

Sadly, this is the only pic I have of His Nibs in the cardi (Note to self: do not send colourblind husband to buy buttons). Not only had he outgrown it, but foolish Tiny Husband put it in a cottons wash (Note to self: stern laundry lecture to Tiny Husband). It hasn’t shrunk too badly, but has felted a bit – not that this is a disaster in traditional all-weather fishermen’s wear, of course. I should dig it out and palm it off on my niece, I think. Nephew’s mum would not be impressed at being given an oul secondhand shrunk thing!